Colposcopy is a diagnostic procedure to examine an illuminated magnified view of the cervix and tissues of the vagina and vulva. Many premalignant and malignant lesions in these areas have noticeable characteristics which can be detected through colposcopy.1

Cervical cancer is the commonest form of cancer in women in virtually all developing countries and is the second most common cancer in women worldwide.2 Every year, 17,686 women in Bangladesh are diagnosed with cervical cancer and 10,364 women die from the disease.3 Hospital-based data revealed that cervical cancer constitutes 22 to 29% of female cancer in Bangladesh.3 There are estimated 450,000 new cases worldwide with about 300,000 deaths each year.4 Of the new cases detected, 86% occur in developing countries and 14% in developed countries.2 In developed nation, the figures for invasive cervical cancer are much lower due to adaptation of different screening tests.2

Invasive squamous cells cervical cancers are preceded by a long phase of preinvasive disease, collectively referred to as CIN. This CIN may be categorized into grades I, II, and III depending on the proportion of the thickness of the epithelium showing mature and undifferentiated cells.3 The precancerous stage is quite long and ranges from 7 to 20 years, which enables early diagnosis at this stage.3 Persistent infection with one or more of the oncogenic subtypes of HPV is necessary cause for cervical neoplasia.3 Studies have shown that HPV is responsible for more than 90% of the cases of invasive cervical cancer worldwide, and it is related to 80% of precancerous changes in the cervix.5 The risk factors for high prevalence of cervical cancer in Bangladesh are related to early marriage, early starting of sexual activities, multiparity, sexually transmitted diseases, and low socioeconomic condition. Therefore, understanding of etiological factors are important for the successful prevention of the disease.2

This was a cross-sectional study done among married female patients who had VIA-positive report attending the colposcopy clinic in Department of Obstetrics and Gynecology of Sir Salimullah Medical College and Mitford Hospital from January 2014 to December 2016. A total number of 97 women were included in this study having age range between 22 and 65 years. Colposcopy-directed punch biopsy was taken from the abnormal colposcopic appearance and specimen sent for histopathological examination.

All the patients underwent both the acetic acid and the Schiller's iodine test before they were subjected to colposcopic-directed biopsies. The biopsies were taken from the acetowhite areas and iodine negative areas.

Age distribution of the patients

Distribution of the patients by sociodemographic characteristics (n = 97)

Distribution of study subjects according to colposcopic findings 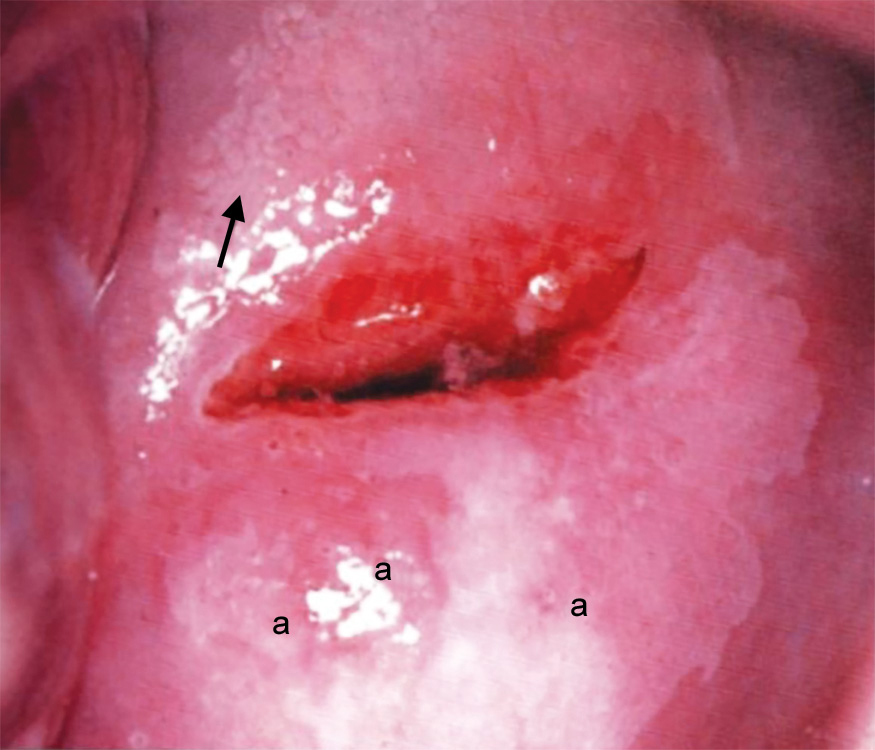 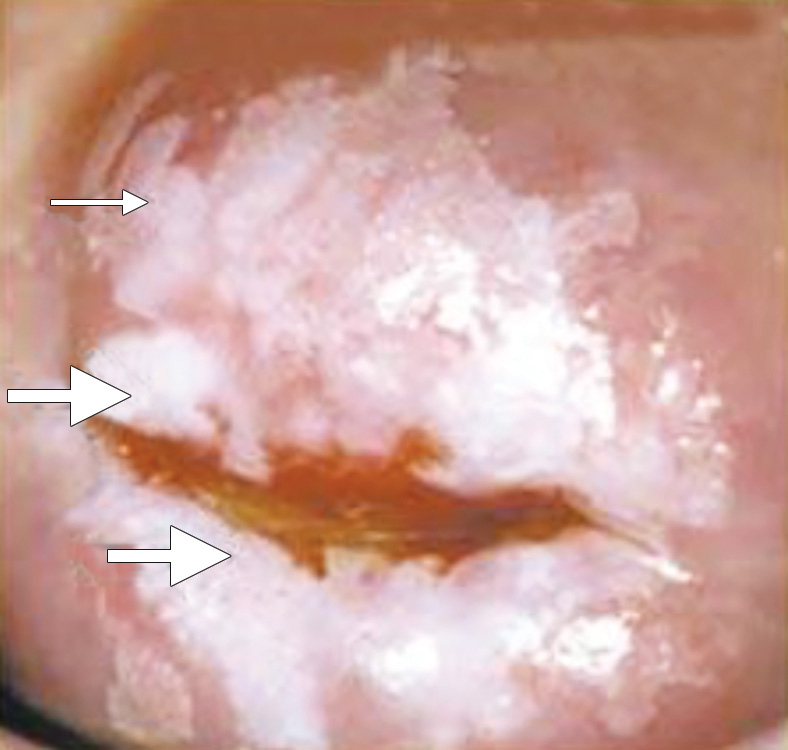 Sensitivity and specificity of colposcopy in detecting CIN

Accuracy of colposcopy for screening by statistical analysis

Colposcopy, a clinical method of proven accuracy, is an excellent means of evaluating clinically unhealthy cervix.6

In this study, the peak age group (47.42%) of VIA-positive cases was 26 to 35 years with a mean age of 30.74 years. Almost two-thirds of the cases were within 26 to 45 years. As the age advanced, the percent of age group reduced according to this study. Tofazzal et al10 found highest incidence of years in age group closely followed by 30 to 40 years, where the age of occurrence of invasive cervical cancer was 40 to 45 years.7 Jahan's findings correspond well with this study8 and it is indicative that CIN is more prone to occur in sexually active women. World Health Organization9 also suggested the priority age group as 35 to 45 years for the screening of CIN.9

The occupational status expressed that housewives (96.91%) were affected predominantly. Their husband's occupation were predominantly business, service, driver, and day laborer. Socioeconomic status had always been playing an epidemiological role in genesis of dysplasia.10 In our study, 77.32% of the respondent's yearly family income was 10,000 to 20,000. Regarding the age of marriage, 74.23% got married at 15 to 20 years of age, which corresponds with the study of Rotkin ID11; 69.07% of the women had their first child at 15 to 20 years; 42.27% of the women had 3 to 4 children, indicating multiparity as a related risk for CIN of the cervix. This observation correlates with the study of Schiffman et al and Rotkin ID.11,12 Smith believes that poor obstetrical and postpartum care and neglect of the symptoms of a lacerated and ulcerated cervix accounts for the (Mary and Daly, 1993) greater frequency of cervical cancer among the poorer classes (Jussawalla and Vole, 1987).13,14

In our study, out of 97 cases, all had VIA-positive acetowhite areas. But colposcopy revealed that 76.29% had CIN and invasive lesions, while 23.71% had either normal or inflammatory lesions. Colposcopy-directed punch biopsy revealed that 59.79% cases had positive lesions like CIN or invasive carcinoma and 40.21% had neither CIN nor invasive lesions. Evidence of CIN and invasive lesions in colposcopy-directed cervical biopsy among the VIA-positive patients strongly suggested the need of VIA as an essential screening test. A high number of cases on histopathological examination were those of infection and among them majority had chronic cervicitis (35.05%).

The limitation of colposcopy is its dependence on observer variability and relatively weaker performance in differentiating normal cervix from low-grade lesions.20 The colposcopic diagnosis of CIN requires an understanding and recognition of four main features: Color tone, intensity of acetowhitening, margins and surface contour of acetowhite area, vascular pattern, and iodine staining. Variations in quality and quantity of these atypical appearances help in differentiating CIN from other lesions and between grades of CIN.21

Cervical cancer continues to be a major public health problem that kills approximately a quarter of million women every year and affects developing countries and young women in particular.22 Cervical cancer occurs at a relatively young age, resulting in proportionally more life-years lost, compared with other major cancers. Age-specific analysis clearly indicates that cervical cancer primarily affects young adult women who are actively involved in their careers or caring for their families.22 It is evident that colposcopy plays a very important role in early diagnosis and treatment of preinvasive and early invasive carcinoma of cervix. So wide use of colposcopy in screening programs of Bangladesh can reduce many young women's morbidity and mortality.