All over the globe, the most common type of reported cervical cancer is SCC keratinizing or nonkeratinizing. Lesser common ones are those having papillary components in squamous cells, which can be in three different forms: (1) Predominantly squamous type, (2) mixed squamotransitional type (PSTCC), or (3) predominantly transitional type.1

Papillary squamotransitional cell carcinoma is a lesser known histological subtype. These tumors have a distinguishing surface papillary growth pattern and can be deeply invading. The PSTCC of the uterine cervix is considered to be associated with an aggressive biological behavior. They tend to recur locally or even metastasize over a longer period of time.2,3

It has also been reported to present at a more advanced stage, despite the histopathological evidence suggesting a superficial or early invasive lesion.4

It becomes necessary to separately identify from the commoner and benign varieties of the cervical papillary lesions like condyloma acuminata and squamous papillomas because of its potentially aggressive biological course.

The recognition of PSTCC of the cervix is important despite being less common, to demarcate its clinicopathological features and progress of disease. A high index of suspicion on the part of the clinician and an awareness of PSTCC by the pathologist are required to make an accurate diagnosis.

Here, we report a case of a postmenopausal lady with PSTCC of cervix.

A 52-year-old, parity and lining tissue (P4L3), postmenopausal lady presented to our outpatient department with complaints of nonodorous, purulent vaginal discharge since 1 year. She had her menopause 6 years back; although there was no history of postmenopausal bleeding, she had discharge per vaginum on and off since last 1 year. She was recently a diagnosed case of diabetes mellitus and had been started on oral hypoglycemic agents. She had no history of oral contraceptive use; partner was single with no exposure to sexually transmitted diseases. She had not undergone cervical cancer screening anytime in her reproductive lifespan. Her general physical examination was normal as per her age. In systemic examination as well as in abdominal examination, no abnormalities were detected.

As a part of the gynecological examination, cervix on speculum examination looked unhealthy with congestions and irregularity, although no obvious growth was seen. Thin mucopurulent discharge was also present. Vagina appeared to be healthy. Uterus was normal size, nontender, and mobile with nonpalpable adenexa and parametrium. However, bleeding from cervix on manipulation was seen. Cervical Papanicolaou (Pap) smear was taken. 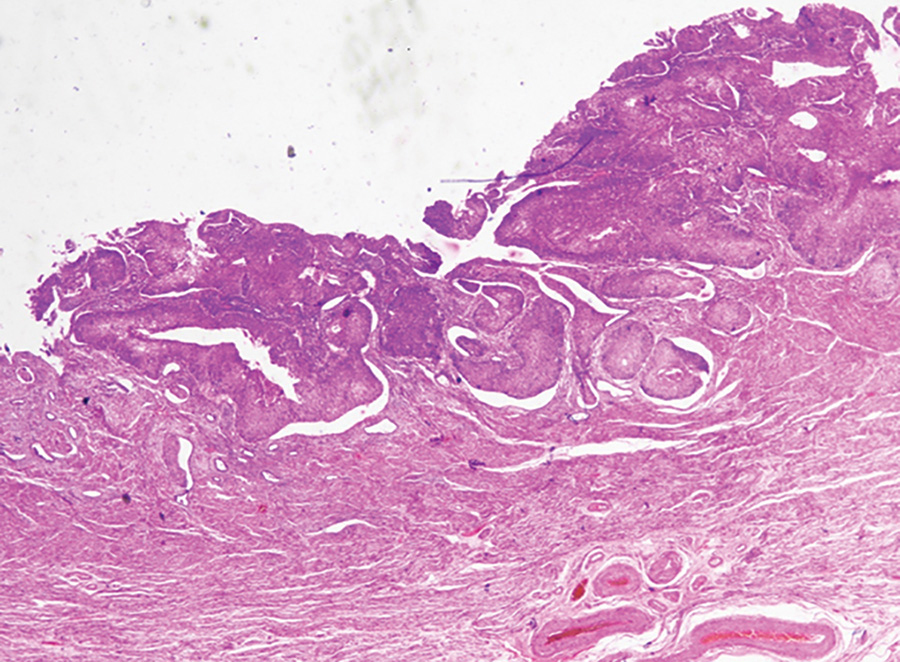 Higher magnification reveals the neoplastic cells lining the papillae and the invasive nests with features of both squamous and transitional epithelial cells. H&E, 200X (20X×10) 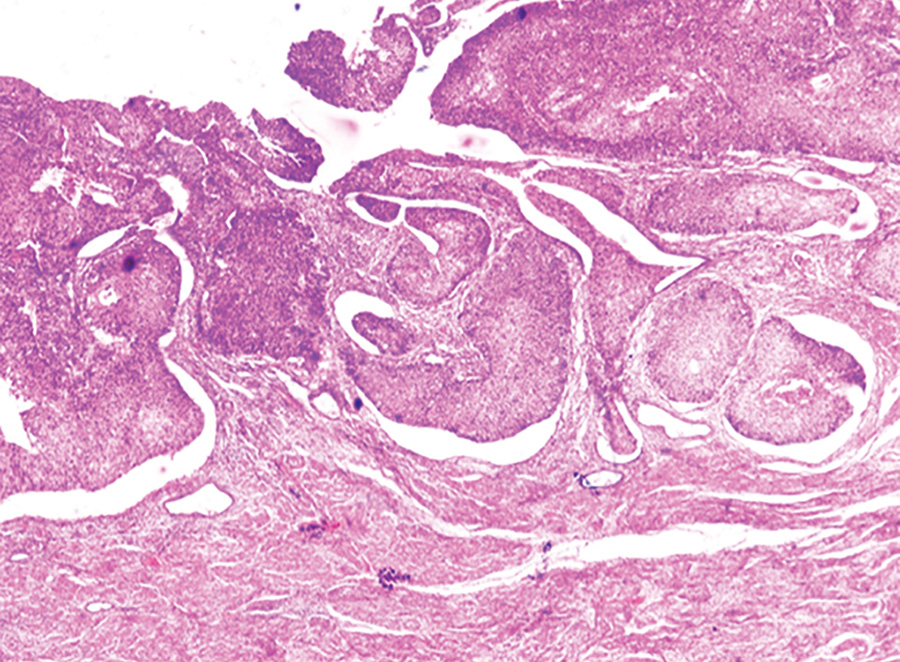 Cervical Pap smear testing report came out with negative for intraepithelial cell or malignancy along with features of inflammatory cervical smear with presence of atypical squamous cells of undetermined significance (ASCUS). In view of the report, colposcopy-directed cervical biopsy was done and resultant report was “suspicious of squamous cell carcinoma.” Invasion of lesion could not be commented upon.

Loop electrosurgical excision procedure of cervix was planned to get a proper depth of biopsy specimen. Histopathology reported HSILs and, once again, margin invasion could not be commented upon due to cautery effect.

The magnetic resonance imaging could not be done due to monetary concerns. Hematology and other laboratory tests including serum electrolytes and renal and hepatic function tests were found within normal limits. Surgical management was formulated for a suspicious cancer cervix with no obvious growth (stage 1 a1) in this postmenopausal woman by laparoscopic hysterectomy and bilateral salpingo-oophorectomy.

Intraoperatively, uterus and bilateral tubes and ovaries were normal. Cut section of the specimen showed pale yellowish uterine body and cervix, with no grossly visible tumor or lesion.

Histopathology reported it to be a PSTCC (Figs 1 and 2) (mixed type)(pT1b2)(pNX), with tumor extension into uterine corpus. However, serosal layer was free of tumor (closest distance 0.1 cm away from serosal surface in lower uterine segment). Another finding was of cervical intraepithelial neoplasia grade III (CIN III) at cervical resection margin. However, invasive carcinoma was lying 0.4 cm away from new cervical resection margin.

The patient was referred to a center for oncology where she underwent six cycles of radiation therapy (teletherapy), which was an overtreatment for her stage of cancer cervix. She is healthy and asymptomatic and free of tumor in 18 months of her follow-up.

The most common subtypes of SCC of the uterine cervix are the keratinizing and nonkeratinizing (nonpapillary) variants.5

Recognition of these variants is important as the course of disease progression and its further management differ among the histologic subtypes.7

Koenig et al studied 32 cases of PSTCC cervix. They divided them into three groups: (1) Predominantly squamous (28.1%), (2) mixed squamous and transitional (50%), and (3) predominantly transitional (21.9%). Histopathologically papillary architecture with fibrovascular cores lined by multilayered, atypical epithelium resembling high-grade squamous intraepithelial neoplasia of the cervix was found in all the cases. They concluded that papillary SCC of the cervix and its subtypes are distinct clinicopathological entities with a morphologic spectrum.

Brinck et al8 in their study of three cases supported the hypothesis that papillary SCCs (unlike verrucous carcinoma) are similar with regard to risk factors to squamotransitional and condylomatous carcinoma.

The human papillomavirus (HPV) may play an etiologic role in some of these tumors; and papillary SCC is the only subtype among squamous/(squamo)transitional carcinomas, i.e., associated with high-risk HPV infection in the absence of HPV-related histopathologic alterations. It reaffirms relation between HPV type and clinical outcome in variants of SCC with papillary features.8

Although it is a known entity for the last three decades, difficulties are encountered in the correct histological diagnosis and staging of this malignancy. In their study, Ng9 concluded that although PSTCC has a distinctive appearance in thin-layer cytologic preparations with predominance of bland-looking basaloid cells or HSIL cells, there is underdiagnosis of the subtype due to scantiness of tumor diathesis and carcinoma cells.

Al-Nafussi and Al-Yusif,4 in their study, concluded that papillary SCC has a propensity for late metastasis and local recurrence despite the fact that histologically it could be misinterpreted as CIN3 with a papillary configuration or as a squamous papilloma.

Does cervix have transitional cells or do these cells come from the urinary tract cancers?

The knowledge about this important histological subtype, PSTCC, is required by both gynecologist and pathologist to differentiate it from a more benign course of other subtypes like verrucous or papillary squamous, because of its late recurrence and metastasis.