Prolapse is a common problem in women attending gynecological clinic. Normally when a woman strains, there is no descent of vaginal walls or of uterus. In prolapse, straining causes protrusion of vaginal walls at the vaginal orifice.

The levels of pelvic support are arbitrarily divided into three levels (Fig. 1). The understanding of this helps to localize the defect and thus, site-specific repair can be performed.1,2

Cystocele and rectocele are due to central defects within pubocervical and rectovaginal septa, respectively.

At tissue level, it has been suggested that abnormal synthesis or degradation of collagen contributes to prolapse. The findings in women with prolapse are:

It should include an evaluation of mental status, nutritional status, body mass index, anemia, and lymphadenopathy.

Position: after emptying the bladder, patient is asked to lie in dorsal lithotomy position. However, the semi-upright position would be a suitable to examine a case of prolapse. A mirror can be provided to the patient to confirm the maximum prolapse that is being observed on forceful straining. If not satisfactory, patient is to be examined in the standing position.

On inspection, comment on external genitalia including pubic hair, mons pubis, labia majora, clitoris, fourchette, scars, and tears. Patient is asked to maximally strain or cough. If seen, prolapsed mass can be of anterior or posterior vaginal walls or cervix, individually or in combination. Note should be made of any congestion, pigmentation, hyperkeratinization, and ulcers.

Decubitus ulcer should be recorded with location, dimensions, margins, edges, floor, sensations and relation to underlying structures, sloping edges with granulation tissue is suggestive of a healing ulcer. However, edges, such as punched out in syphilis, undermining in tuberculosis, and beaded in malignancy, are abnormal.

A bimanual examination should be made to note the direction and size of uterus and adnexa. Levator tone should be appreciated with two fingers on the posterior vaginal at 5 or 7 o’ clock position with thumb on the perineum and patient is asked to squeeze the pelvic muscle like holding the urine or avoiding passing of gas. It is graded according to modified Oxford scale.

Bidigital rectovaginal (PV and RV) examination is performed to assess the thickness of rectovaginal septum. On straining if prolapsed mass is felt between the vaginal and rectal finger, it is indicative of enterocele.

In patients with complaints of urinary incontinence, any leaking of urine with straining is documented. If present, then urethral hypermobility can be tested with a well-lubricated cotton swab stick inserted in the urethra up to 3 cm and asked to strain. If the angle of deflection is %3E;30° from horizontal, it is indicative of loss of support at urethrovesical angle or urethral hypermobility. A protractor or a goniometer is used to measure the angle.

In severe prolapse, stress urinary incontinence can be masked due to kinking effect of the prolapse. Thus, prolapse should be reduced and patient is asked to strain with full bladder to note the leaking.

Prolapse of vagina is generally a straightforward diagnosis. However, less common disease entities may present as bulge in the vagina:

Pessaries are supportive vaginal devices, usually made from inert material, such as silicone. They are designed to be placed into the vagina, to retain and hold pelvic structure in their normal positions. Pessaries are used when surgery is not elected or contraindicated. They can also be used as temporary treatment in a patient awaiting a surgical procedure. Pessaries are effective in relieving symptoms of POP (Table 1).

Confirmed preoperatively by noting loss of the lateral sulci and lack of rugation over the epithelium along the base of the bladder and elongation of the anterior vaginal wall.

Clinically, vaginal examination using a speculum reveals a preponderance of the prolapse lateralized to one side as speculum is withdrawn. Besides this, a ring forceps can be used by gently exerting anterior traction along the vaginal sulci. If the defect is reduced then the defect is peravaginal and can be approached with a paravaginal repair technique.

In these cases, repair should be performed by fixing the endopelvic fascia to the arcus tendineus fascia (white line) of the pelvis. This may be performed retropubically through the space of Retzius or vaginally.

After separating the vaginal epithelium off the underlying rectovaginal fascia as in traditional method, the surgeon inserts a finger of non-dominant hand into the rectum to inspect the rectovaginal fascia for defect. These defects are then repaired with interrupted suture to plicate over the rectal wall. In this levator ani is not plicated as this may result in band-like stricture over the posterior wall, causing dyspareunia.

The vaginal apex can be resuspended with a number of procedures: 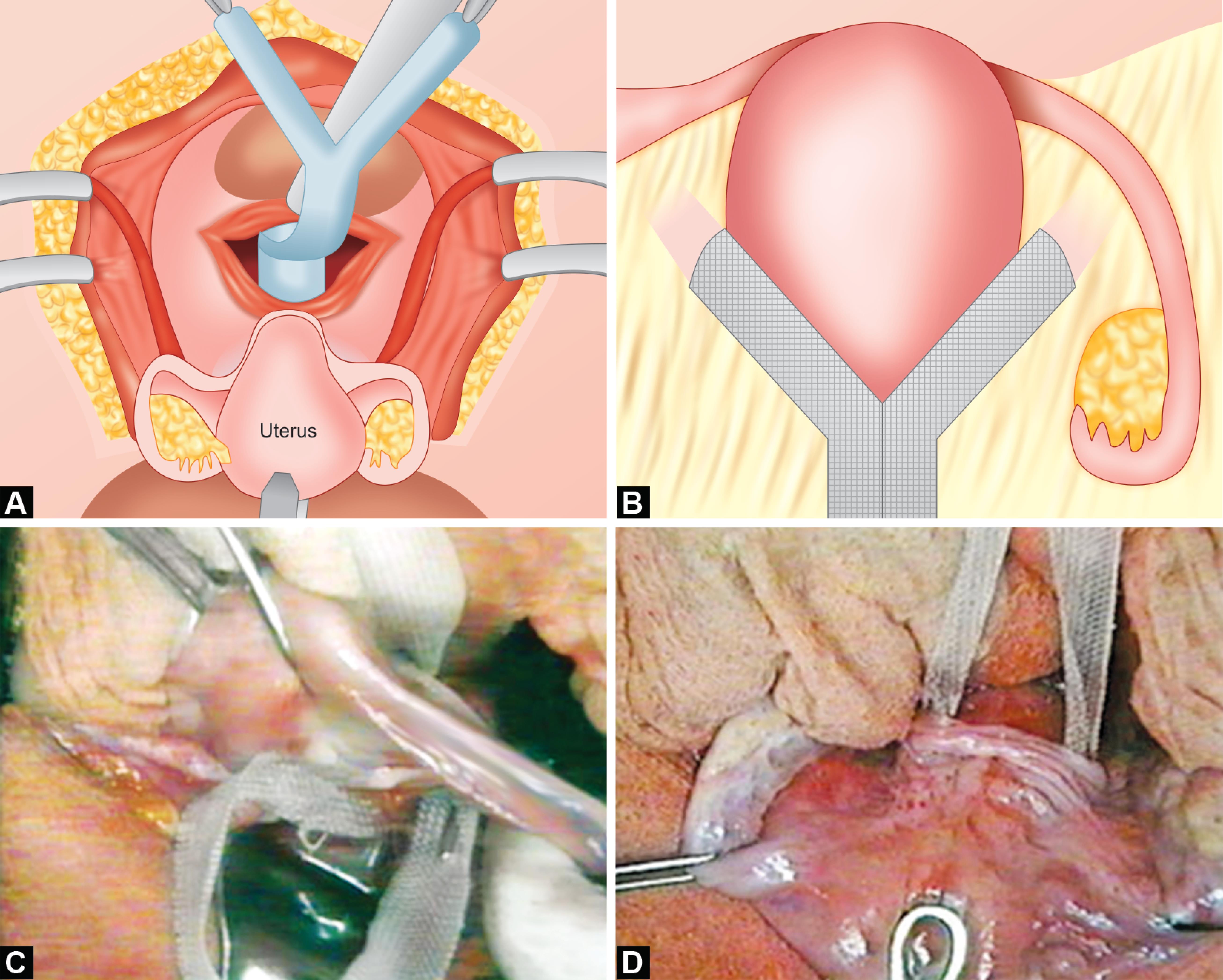 Figs 2A to D: Sacrocolpopexy for vaginal vault prolapse

This technique can be performed at the time of vaginal hysterectomy or to correct post-hysterectomy apical cuff prolapse. After entrance into the peritoneum is complete, traction on the ipsilateral posterior vaginal wall with rectal digital examination will facilitate transperitoneal identification of the uterosacral ligaments. Now two sutures with non-absorbable material in lateral to medial fashion is placed—one at the level of ischial spine and another a little high up on both sides. These sutures are then brought to the ipsilateral vaginal apices. Fixation of the cuff at this level reproduces cuff placement to the normal position of the cervicovaginal junction. Anterior vaginal repair should be performed prior to tying down the vaginal cuff.

By laparotomy or by laparoscope cul-de-sac and peritoneum overlying the sacrum is visualized. A window in the peritoneum over sacral promontory is created and permanent sutures are placed through the anterior longitudinal ligament, approximately at level of S1. The vaginal cuff is then exposed by dissecting off the overlying peritoneum. Fixation of Y-shaped graft over anterior and posterior vagina is performed. This Y-shaped graft is then brought posteriorly along the hollow of sacrum and affixed to the anterior longitudinal ligament suture, overriding the sacral promontory.

Many different graft types have been described. Biological grafts have high-failure rate when placed at apex. As graft technologies evolve, identification of the optimal graft material then maximizes durability and compatibility may materialize. Besides graft complications, operative hemorrhage is significant risk. Specifically during placement of sacral suture laceration of sacral vein may be problematic.

In this anterior and posterior colpoperineorrhaphy is combined with amputation of cervix, suturing of cut end of Mackenrodt’s ligament in front of the cervix and covering raw area of amputated cervix with vaginal mucosa (Strumdorf’s suture). This operation is suitable for women in reproductive age group. However, fertility is somewhat reduced and there can be incompetent cervical os and resultant risk of abortion and preterm delivery.

Vaginal hysterectomy with anterior and posterior colpoperineorrhaphy is recommended in clinical practice over age of 40 years, who are not keen on retaining their childbearing and menstrual function. If there is associated abnormal uterine bleeding, fibroid, adenomyosis this age can be relaxed up to 35 years (Fig. 2). However, in European countries, hysterectomy is rarely performed during pelvic floor reconstruction while in United States and India hysterectomy is often performed concurrently with prolapse surgery.

A cervical incision is performed and the uterovesical fold and pouch of Douglas opened. The uterosacral and cardinal ligament are divided and ligated first, followed by uterine pedicles and finally the tubo-ovarian and round ligament. The sequence can be reversed also, according to ease of surgeon. In case of procidentia, care should be taken to avoid kinking of ureters which are often dragged into lower positions than normal. After closure of the pelvic peritoneum, the upper pedicles are tied in the midline to give support for the vaginal vault. In the same way, uterosacral ligaments are tied posteriorly to obliterate potential enterocele space. The vaginal epithelium is then closed with interrupted sutures.

The new surgery aims to create new connective tissue to replace broken ligaments and septa instead of trying to tighten or suture an altered suspensory apparatus. Synthetic meshes or biological grafts are used for this purpose. Anatomy is restored rather than distorted, and postoperative pain is tremendously reduced.

Almost 30% of patients will require a reoperation indicating weakness in native tissue repairs.

Standard cystocele repair carries a high-failure rate. Recurrence risk with prolapse repair appears to be significant in the anterior compartment compared to the apical and posterior.

Mesh Use in Prolapse Surgery

Anterior compartment: Perigee (American Medical System) used helical needles through the obturator foramen to place a new hammock-type polypropylene mesh. The principle was that it would effectively address multiple defects in the fascial hammock.

These use a single vaginal incision for both dissection and introducing the mesh device. These mesh kits use trocar-less delivery systems and lighter meshes. These devices obviate the need to use blind needle pass and thereby reduce complication rates related to insertion.

The most common complications are mesh exposure (erosion) and pain (including dyspareunia). Deaths have been reported in association with bowel perforation and hemorrhage.

Exposure (erosion) may occur with any reconstructive material (e.g., synthetic or biograft) and following any pelvic reconstructive procedure. Patients with mesh exposure may be asymptomatic.

Contraction: contraction of mesh appears to cause painful vaginal bands resulting in dyspareunia.

Pelvic pain or dyspareunia: pelvic pain following transvaginal mesh (TVM) placement can occur even in the absence of mesh contraction pain has been reported in up to 30% of patients.

The key points for preventing complications from TVM are:

Mesh was introduced to reduce the risk of recurrent prolapse.

It has helped anatomically but symptomatically has not helped.

As far as reoperation rate is concerned, it has not helped.

Laparoscopic surgery has some potential advantage:

Laparoscopic surgery has some potential disadvantage:

The pelvic ureter must be identified before placing sutures in the uterosacral ligament. If needed, a releasing incision may be made in the peritoneum just lateral to the ligament (and medial to the ureter) to prevent kinking of the ureter.

Duplicate the steps performed in the open procedure, as closely as possible.

Most rectoceles can be treated via a vaginal approach by site-specific repairs. Laparoscopic repair has been described as an alternative approach.