Background: Parasitic fibroids are a rare type of fibroids without direct uterine attachment. They pose a diagnostic dilemma and often present atypically.

Case description: We report a rare case of large secondary parasitic fibroid in a 24 year unmarried female who presented with history of lump abdomen for 6 months. She had history of laparoscopic myomectomy done 2.5 years back for the same complaint with histopathology report suggestive of leiomyoma. On examination, it was found to be subserosal pedunculated fibroid. All the tumor markers were negative except CA 125 which was 225 IU/mL. Exploratory laparotomy was done. Uterus was normal size and seen separately. Bilateral tubes and ovaries were normal. A mass of size 30 × 22 × 15 cm, firm in consistency occupying all the quadrants of abdomen, was observed. It had no attachment to the uterus or to the bowel. Mass weighing 6.5 kg was removed completely and sent for histopathology. HPE report confirmed leiomyoma. Her postoperative period was uneventful.

Conclusion: If the patient had prior history of myomectomy and mass is separate from the uterus with its blood supply away from uterus, diagnosis of parasitic leiomyoma should be considered.

Clinical significance: During morcellation procedures, a thorough inspection and washing of peritoneal cavity must be carried out, and endoscopic bag should be used to prevent secondary parasitic leiomyoma.

Uterine leiomyomas are the most common benign pelvic tumors in reproductive-age women. They are benign, monoclonal tumors of smooth muscle cells of myometrium with abundant extracellular matrix. Wandering or parasitic fibroids belong to type VIII of the FIGO fibroid classification and have no myometrial involvement and are without direct uterine attachment.1

Parasitic fibroids are known for their rarity, but giant ones are very rare. Hereby, we report a case of giant secondary parasitic fibroid of 6.5 kg measuring 30 × 22 × 15 cm first time. A 24-year-old unmarried female came to gynecology outpatient department with chief complaints of lump abdomen for 6 months. It was initially small in size and gradually progressed to occupy the whole abdomen. Patient had no menstrual complaints. She had history of laparoscopic myomectomy done 2.5 years back for the same complaint with histopathology report s/o leiomyoma. Her general physical examination was normal.

On per abdomen examination, a large 30 × 22 × 15 cm mass was felt occupying all the quadrants of abdomen, smooth surface, regular margin, firm consistency, and nontender with restricted mobility. Lower limit of the mass could not be reached. On per rectal examination, similar mass was felt, and uterus could not be felt separately. No nodularity felt and rectal mucosa was free. Her routine laboratory reports were normal.

On magnetic resonance imaging of abdomen pelvis, uterus was normal size with large well-circumscribed lesion attached to the anterior wall of the uterus through a broad stalk suggestive of pedunculated subserosal uterine leiomyoma. Bilateral adnexa were found to be normal.

Exploratory laparotomy was done. Uterus was normal in size and seen separately. Bilateral tubes and ovaries were normal.

A mass of size 30 × 22 × 15 cm, firm in consistency occupying all the quadrants of abdomen, was observed. It had no attachment to the uterus or to the bowel. Mass was highly vascular and seemed to have vascular supply from greater omentum with retroperitoneal neovascularization. Mass was removed completely. It weighed 6.5 kg. Hemostasis was achieved, and mass was sent for histopathology. HPE report confirmed leiomyoma. Her postoperative period was uneventful, and blood transfusion was not required. Patient was discharged on postoperative day 10, and at 6 month follow-up, she does not have any complaint, and no new mass was observed on USG (Figs 1 and 2). 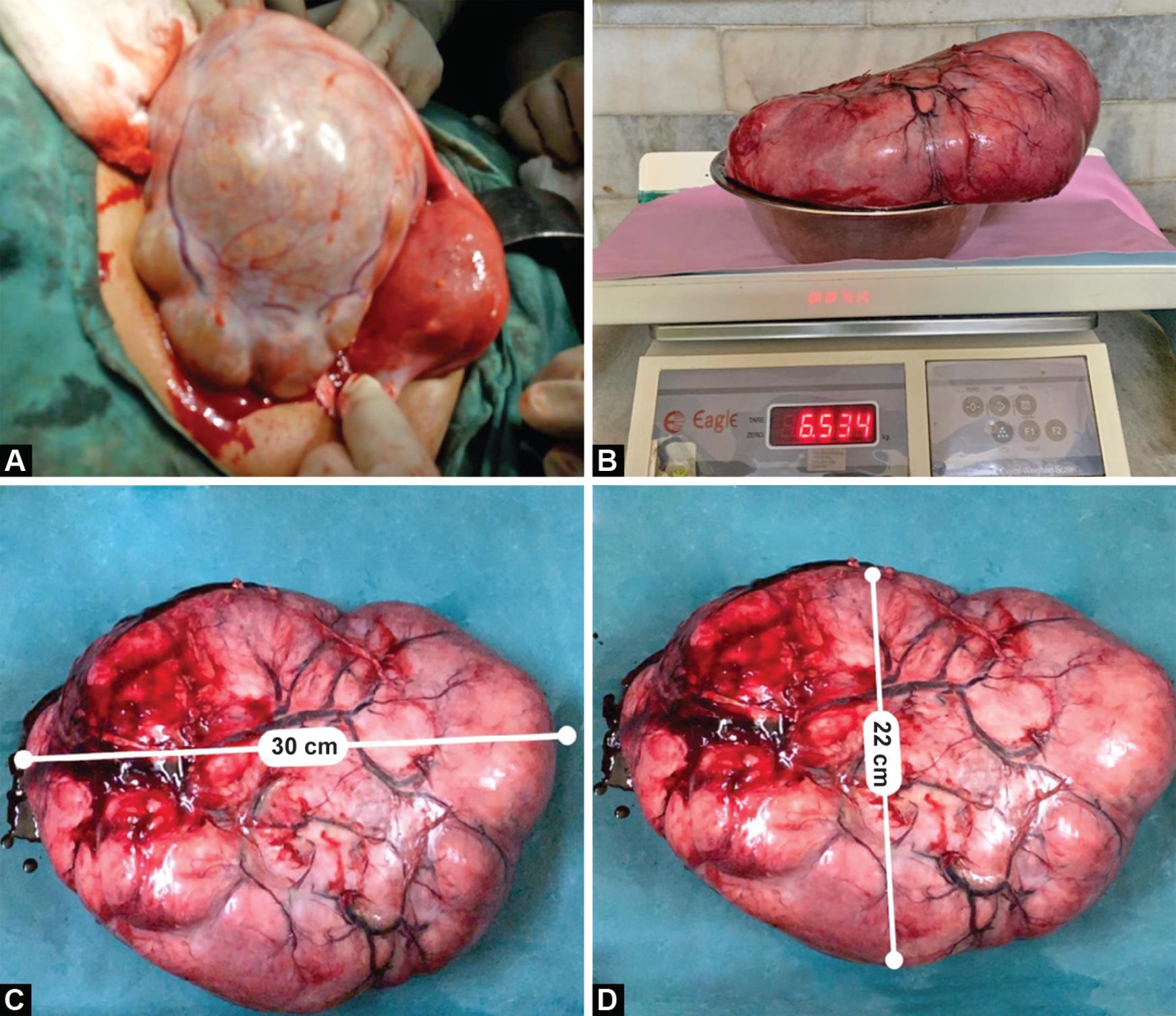 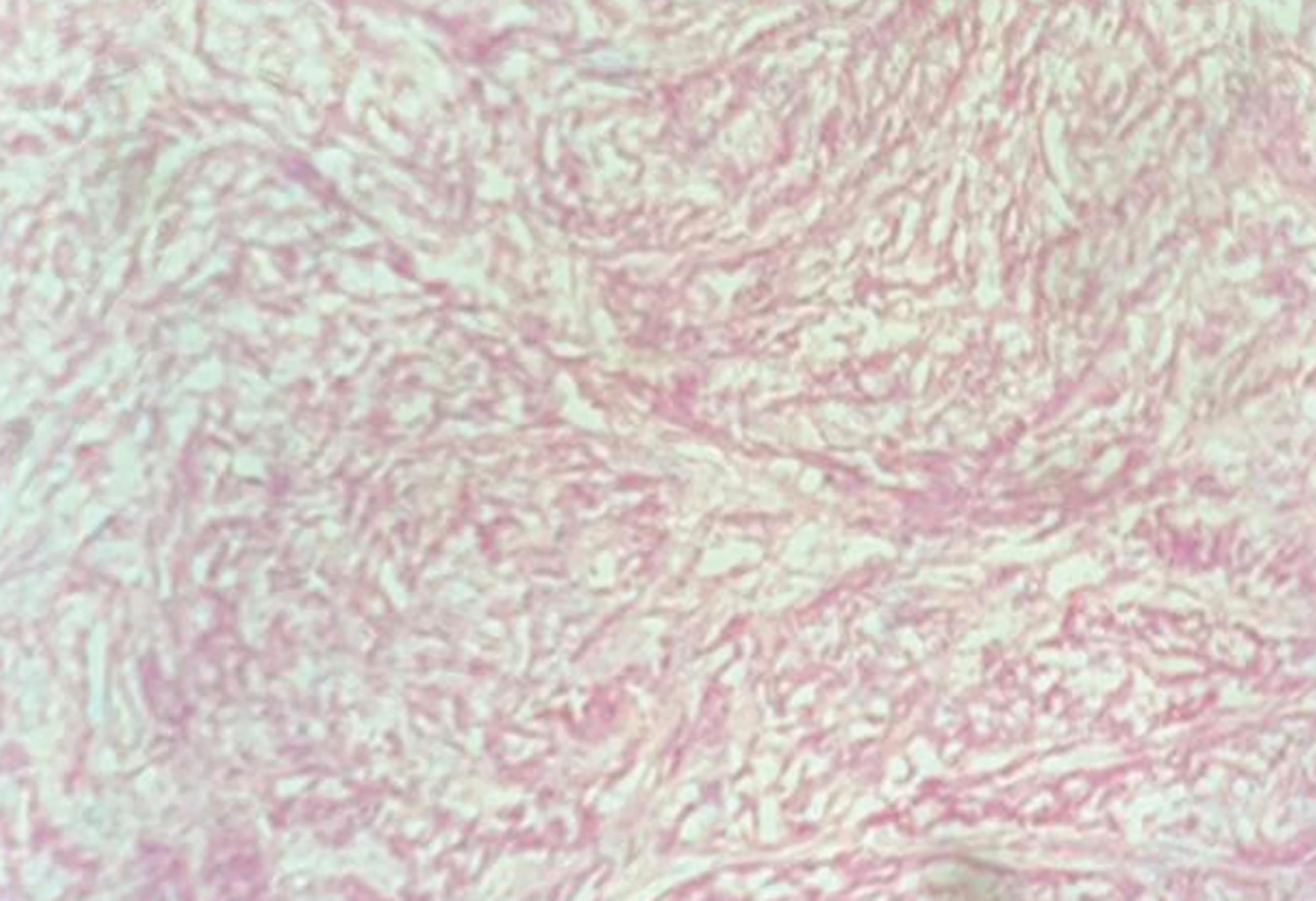 The term parasitic leiomyoma was coined by Kelly and Cullen in 1909.2 Parasitic myomas are a rare variant of pedunculated subserosal myomas. It has been suggested that if a pedunculated subserosal myoma develops a long stalk to become what is termed as a wandering leiomyoma, it can grow on and adhere to surrounding structures, such as omentum or broad ligament, and develop an auxiliary blood supply.2

Recent theory suggests “iatrogenic” parasitic myomas may be caused by the seeding of remnants of fibroid during morcellation at the time of myomectomy and hysterectomy.

Surgeons must be aware of this rare complication of myomectomy procedures.

Most of them reported in last few decades are secondary to increased laparoscopic procedures of the uterus.4

Lu et al. presented six cases of parasitic fibroid, and all of them had history of laparoscopic hysterectomy or myomectomy with power morcellation.6

Majority (93%) of parasitic leiomyoma occurs in pelvis as in our case.4

Unlike our case, they are usually asymptomatic.8 The most common symptoms if present are pressure symptoms that include early satiety, bloating during eating, abdominal discomfort, and nausea.9–11 Our patient presented with lump abdomen and discomfort.

Although parasitic leiomyoma are rare tumors, they should be included in the differential diagnosis of pelvic or abdominal tumors in female. As prevention is better than cure, one should take care during morcellation procedure to avoid such complications.

Parasitic fibroids are rare and giant ones (30 × 22 × 15 cm) are very rare. Diagnosis of a parasitic leiomyoma should be considered if patient had prior history of myomectomy, mass is separate with blood flow away from the uterus. During morcellation procedures, thorough inspection and washing of peritoneal cavity must be carried out and endoscopic bag should be used to prevent secondary parasitic leiomyoma.