Background: Cervical cancer (CC) is the second most common cancer among women in India, while renal cell carcinoma (RCC) is the most common malignancy of kidney with a rising trend. Association of RCC with other malignancies, such as bladder and rectal carcinoma, is well known but with pelvic tumors, such as CC, are rare.

Case description: A 45-year-old female P2L2 presented with the complain of foul-smelling discharge off and on and intermenstrual bleeding, was diagnosed having carcinoma cervix stage 2A, and later found to have RCC stage T1b on further evaluation. Patient underwent a radical hysterectomy with bilateral pelvic lymphadenectomy with partial nephrectomy. Histopathology of renal specimen showed clear cell carcinoma with infiltrated margins, for which interval complete nephrectomy was performed.

Conclusion: There are only few reports of dual cancers of cervix and kidney in literature. The recent increase in incidence is ascribed to improving imaging facilities.

Cervical cancer (CC) is the major healthcare problem all over the world but more so in developing countries. Its incidence has decreased in developing world due to increased routine screening by Papanicolaou (pap) smear. Carcinoma cervix is one of the most common gynecological cancers worldwide, second only to breast cancer.1 It is a common cause of cancer death in developing countries. 569,847 new cases of CC were diagnosed in 2018 out of which 311,365 women died all over the world.2

Renal cell carcinoma (RCC) accounts for >90% of cancers arising from the kidney and it is the 14th most common cancer.3 The risk of developing antecedent, synchronous, and metachronous primary malignancies is high in patients diagnosed with RCC. Association of RCC with malignancy in prostate, bladder, lung, breast, rectum, malignant melanoma, non-Hodgkin lymphoma (NHL), etc., is common but with other pelvic tumors, such as CC, are rare.

In this case, RCC was found during staging and evaluation of the primary cervical carcinoma and both the malignancies were treated by surgery. So, diagnostic imaging should be used as a standard of care in all pelvic malignancies.

This is a 45-year-old female P2L2 who presented with the complain of foul-smelling discharge per vaginum for last 8 months and intermenstrual bleeding for 6 months. Patient denied any significant medical, surgical, and family history.

On per vaginal examination, cervix was replaced by a hard growth of approximately 4–5 cm on posterior lip of cervix. Uterus was normal in size and shape. Bilateral fornices had restricted mobility.

Synchronous malignancies are defined as malignancies diagnosed concurrently or within 3 months of diagnosis of the former. The incidence of multiple malignancies has long been reported in the literature. 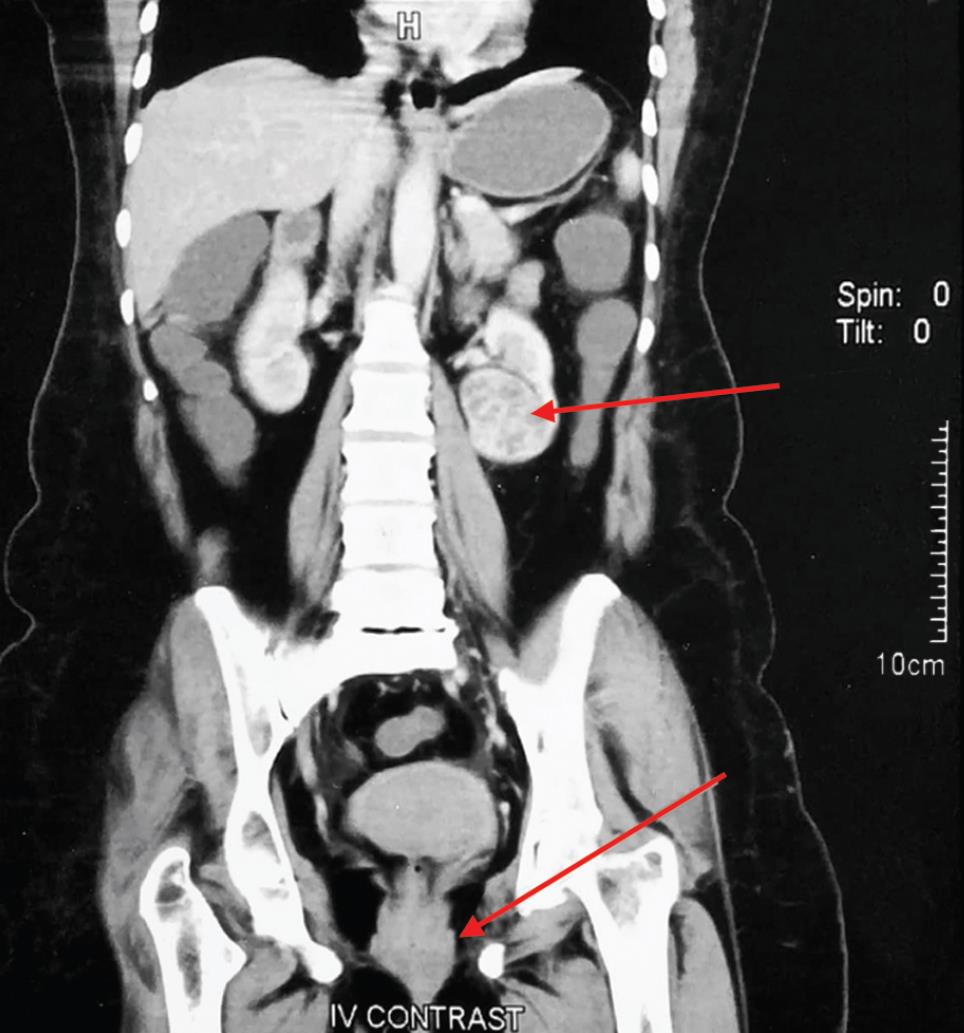 Warren and Ehrenreich were the first ones who described multiple malignancies as a separate entity. Their work was based on 1,078 cancer autopsies, in which 40 (3.7%) had primary multiple malignant growths. They found that the risk of developing antecedent, synchronous, and metachronous primary malignancies is high in patients diagnosed with RCC.4

Shaukat et al. had a similar observation. He presented a series of three cases with a diagnosed pelvic malignancy but further workup revealed a kidney tumor too. Both the malignancies were evaluated individually and diagnosed as two different primary neoplastic lesions. One of them was RCC with carcinoma cervix.7

Momah et al. published a case report in which he found synchronous leiomyosarcoma of kidney and SCC of cervix.8

Early diagnosis of the other primary malignancy is of paramount importance in improving the prognosis. Therefore, in practice of gynecological oncology, one should always bear the thought of the presence of a separate other malignancy and not just metastasis from the earlier found tumor.

Simultaneous diagnosis of multiple primary malignancies is a rare phenomenon. Renal cell carcinoma is the most common tumor found in multiple malignancies, though not so commonly reported with pelvic tumors. But few cases have been reported, so it should always be ruled out in a case of pelvic malignancy and vice versa. Since there are no established guidelines for the management of such cases, so this topic requires more research. At present, multidisciplinary approach is used to treat these cases. Early diagnosis is the key to a favorable prognosis.